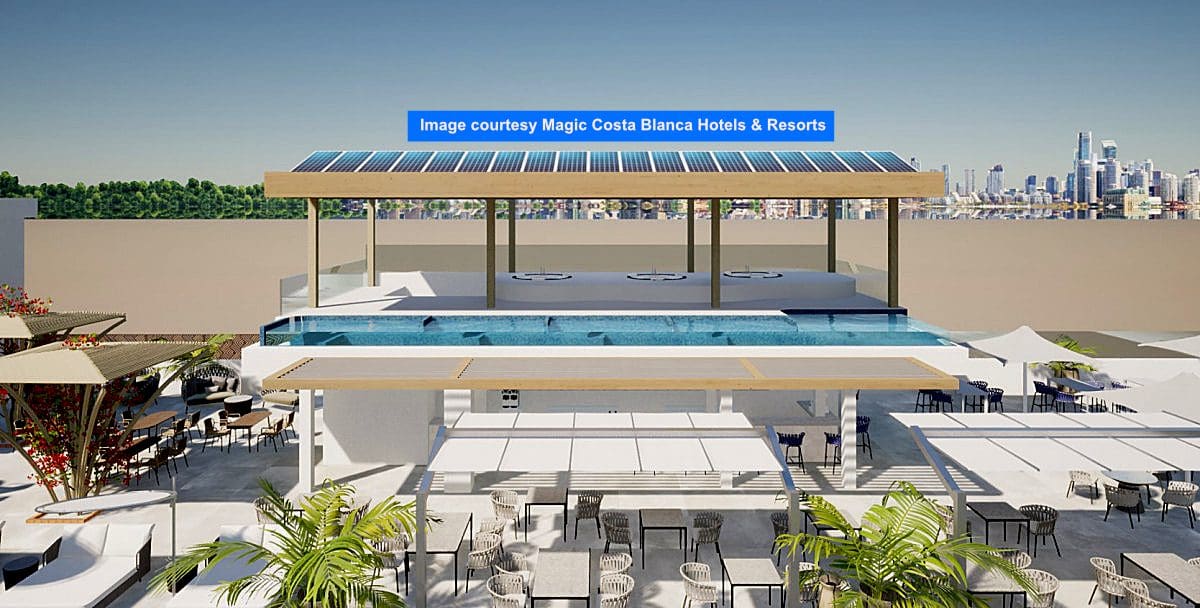 Villa España Hotel will also feature the best of Spanish and international gastronomy.

Due for completion next May, the Villa España Hotel—a unique creation of the Magic Costa Blanca Hotels & Resorts chain—will replace the old Magic Fenicia Hotel near Park de Elche.

According to Spanish site Husteltur, the four-star hotel will be the first conceived as an international showcase for Spanish culture, technology and cuisine.

The hotel will have many unique features. Apart from the elevated swimming pool—a first for the resort—there will also be four mini glass pools, two outdoor jacuzzis and a solarium.

A gateway to Spanish and international gastronomy

The company plans to make the new hotel a key attraction for gastronomes. Its the bars will have the finest Spanish wines and top-class craft beers, while the seventh floor will accommodate a restaurant specialising in both Spanish and international cuisines.

The hotel will have individually themed rooms and suites, each showcasing a different aspect of Spanish life, art and culture—the first in Spain to do so.

Javier García, Vice President of Magic Costa Blanca Hotels & Resorts, emphasised the group’s commitment to continue providing Benidorm and its visitors with the latest advances in the hospitality sector.

The rooftop area of ​​Villa España Hotel aspires to be a benchmark for tourism in the Valencian community with areas such as the first suspended pool in Benidorm and premium restaurant areas facing the sea. … We will offer tourists and residents an enriching experience, disseminating our heritage and that of hundreds of Spanish municipalities.

In this Spanish report, García said that the project will cost of 23 million euros, and will extend the area now occupied by Hotel Magic Fenicia to two adjoining plots close Poniente beach and Elche Park.

Each floor will be dedicated to an autonomous Spanish community, while the rooms and suites will have the name of a Spanish city.

The new project will make the richness and uniqueness of Spain’s heritage known throughout the world. We hope that it will be a real stimulus for the sector and employment in the Valencian Community.

Bag a bargain, plus a taste of Spanish food and culture, at Benidorm’s fabulous antique market