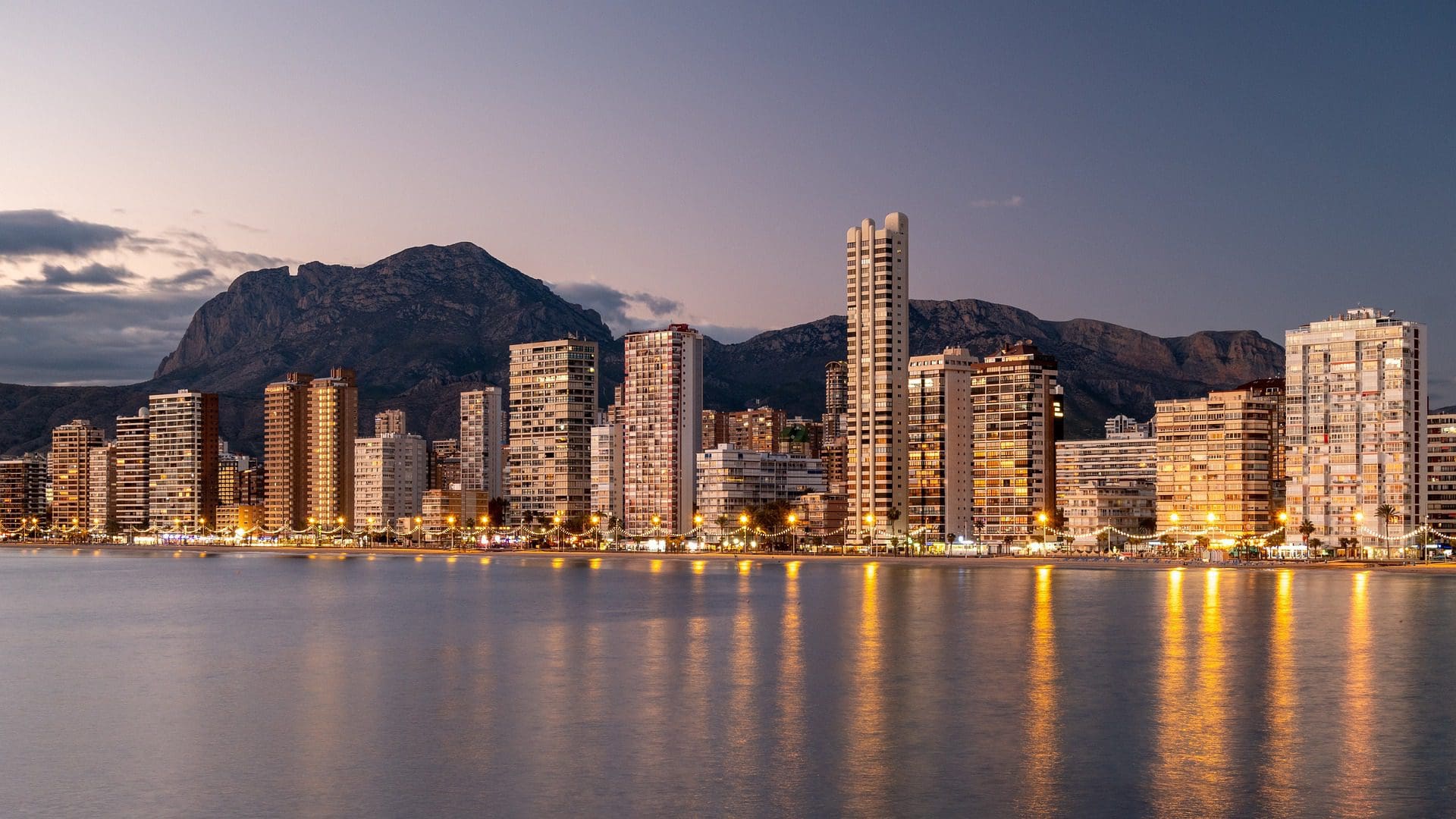 Home Blog Benidorm: a magnet to millions where the truth is stranger than the myths

Benidorm: a magnet to millions where the truth is stranger than the myths

There are many strange myths about Benidorm, one of Spain’s most important tourist destinations, and a magnet to visitors from around the globe. Today around million holidaymakers visit Benidorm every year, making it Europe’s third-busiest destination after London and Paris. Although the British remain the principal market, it is also popular with Dutch and Belgian tourists – and many Spaniards too.

But the true facts about this resort are far more astonishing than the bunkum.

My favourite fact concerns the efforts of Pedro Zaragoza—the man credited with Benidorm’s creation, to get Catholic Spain to accept the bikini.

Zaragoza, who died in 2008 aged 85, had seen pictures of the two-piece swimming costumes in magazines. He liked what he saw, and knew that—in northern Europe—they had become enormously popular. But in Catholic Spain, they were condemned by the Church and banned by Franco’s regime.

As far back as 1907, strict rules were enforced in Benidorm to ensure public decency. Men and women were forbidden to bathe together on the beaches of the resort. Each had separate sections they were permitted to occupy, with most of the children being in the women`s section. These regulations were mandatory for anyone who visited Benidorm.

The rules also clearly stated that “No person can bathe during the day without covering themselves decently,” and members of the opposite sex were also not permitted to walk or stand outside their own zones.  No one really knows when this rule was faded out but it is thought it lasted for around five years.

In 1953—cocking a snook at later laws governing public decency—Zaragoza, who became mayor of the resort in 1950 aged 28, did the unthinkable. He authorised the wearing of bikinis in his town. No one in the country had attempted this, and there was uproar. As members of the Civil Guard scuffled with scantily-clad girls on Benidorm’s beaches, the local archbishop threatened to excommunicate Zaragoza, who then decided to appeal directly to Spain’s most feared dictator, General Franco.

At 6 am one morning he set off for Madrid on his Vespa motor scooter, arriving in the Spanish capital eight hours later. “I changed my shirt but I went into the General with my trousers spattered with motor oil,” he later claimed. “He backed me, and the bikini stayed.”

Now to my favourite myth about Benidorm: the city has to import sand from Morocco to maintain its fabulous beaches. This “fact” apparently originated when a tour rep told this to a coachload of tourists heading from Alicante airport to their hotel in Benidorm in the early 70s.

His comment passed into media history, and many still believe it is true. The fact is that the resort’s seven kilometres of silky soft sand are absolutely natural, and the city is actually an exporter that supplies high-grade sand to a number of the local resorts.

The truth is that Benidorm spends more on keeping just its beaches clean than most cities do on all their streets.

Another true fact is that the Costa Blanca, literally in English “White Coast”, was devised as a promotional name used by BEA when they launched their air service (for £38.16s.) between London and Valencia. The Costa Blanca comprises 200 kilometres or so of coastline belonging to the province of Alicante in Spain.

When Zaragoza—a former phosphate miner and railway porter—took over as mayor of Benidorm in 1950 it was a sleepy Spanish village with few amenities.

Today it is a forest of high-rise hotels and (300+) overlooking an amazing variety of pubs catering to the tastes of numerous nationalities. While there is now a resident population of some 60,000, in the summer this number reaches around a million; many of these visitors return year after year.

This transformation was largely the work of Zaragoza, who remained mayor for 17 years. Initially, he’d never envisaged development on such a scale. In the early days, he visualised a small town with attractive plazas and boulevards, lush gardens and comfortable hotels.

“Holidays,” he once said, “used to be just for the rich. Mother and children decamped to a cool summer spot for three months and the husband stayed a fortnight then returned to the city. I thought humbler, middle-class people deserved holidays, too.”

Having arranged for water to be pumped to Benidorm from 10 miles distant to service the village, Zaragoza set about encouraging package tour operators who could fly planeloads of tourists to Spain.

As Benidorm was gradually transformed, he became an enthusiast for high-rise architecture:

The most enduring myth about Benidorm is that it was originally a fishing village. This is simply untrue. The fishermen of Benidorm were actually deep-sea fishermen who spent many months in the Atlantic, South America and north of Spain. They were famous all over Spain for their skills with trap netting and were much sought after in the 18th century.

They had for many years used Almadraba netting—an ancient Arabic tradition—to catch Tuna by placing a maze of deep-sea netting to progressively smaller inshore pools. A tradition which continued until the 1950s at the Rincon De Loix to catch Tuna as they migrated across the Mediterranean.

Another myth is that the resort has to import sand from Morocco to maintain its fabulous beaches. This “fact” apparently originated when a tour rep told this to a coachload of tourists heading from Alicante airport to their hotel in Benidorm in the early 70s.

His comment passed into media history, and many still believe it is true. The fact is that the resort’s seven kilometres of silky soft sand are absolutely natural, and the city is actually an exporter that supplies high-grade sand to a number of the local resorts. Benidorm spends more on keeping just its beaches clean than most cities do on all their streets!

A third myth relates to the gap in the mountain range that looms over Benidorm. This claims that King James I was mounted on his horse at the top of the Puig Campana peak when the animal gave the mountain a kick, resulting in a piece coming loose and being launched into the sea, creating Benidorm, or “Bird” Island.

Another, more romantic legend tells of the giant named Roldán who was in love with a woman named Alda. When she died due to a curse, Roldán removed a piece of the mountain so the sun’s rays could filter through and illuminate her.

A fourth myth is that Benidorm is packed packed with mostly British tourists, but, as the Icelolly site points out:

In reality the resort is as popular among Spanish nationals as it is with the British. This combined with the fact that many Spaniards live and work in Benidorm means that you will hear accents and dialects from all over Spain.

The site dispels the myth that Benidorm only offers British pub food and fast food and fry-ups.

Nothing could be further from the truth. Thanks to its status as an international tourist destination, the resort has restaurants offering cuisines from all over the world, including Italian, Chinese, Thai and Indian—and, of course, some that do British fry-ups. Naturally, there are a huge number of Spanish restaurants that serve tapas and fresh seafood, as well as regional cuisines such as fish stew and paella.

While it’s true that the beaches are crowded in the summer months, there’s a lot more to the resort than simply lying on recliners and towels, soaking up the rays and turning oneself lobster read. There is a range of water sports on offer including jet-skiing and scuba diving, and families can have loads of fun at one of the theme or water parks, or at the go-karting track. A 30-minute drive into the countryside will take you to Algar Falls, a beautiful area of waterfalls with pools for swimming, just north of Benidorm.

Further on there’s the village of Guadalest. Occupying one of the most stunning positions in Spain, this small village is precariously perched on the pinnacle of a granite mountain, giving fabulous views across the valley carved out by the river from which the village takes its name.

Details of these attractions, and how to find them, can be found here.

As an online travel service, Benidorm Travel Mart helps you build your own holiday by providing access to a wide range of cheap flights, hotels and airport transfers.

Our search engine can compare hotels from all major booking companies, including Expedia, Booking.com and Hotels.com, and help you find the best available deal.

Benidorm 2022 Holidays: Sorting the facts from the fiction