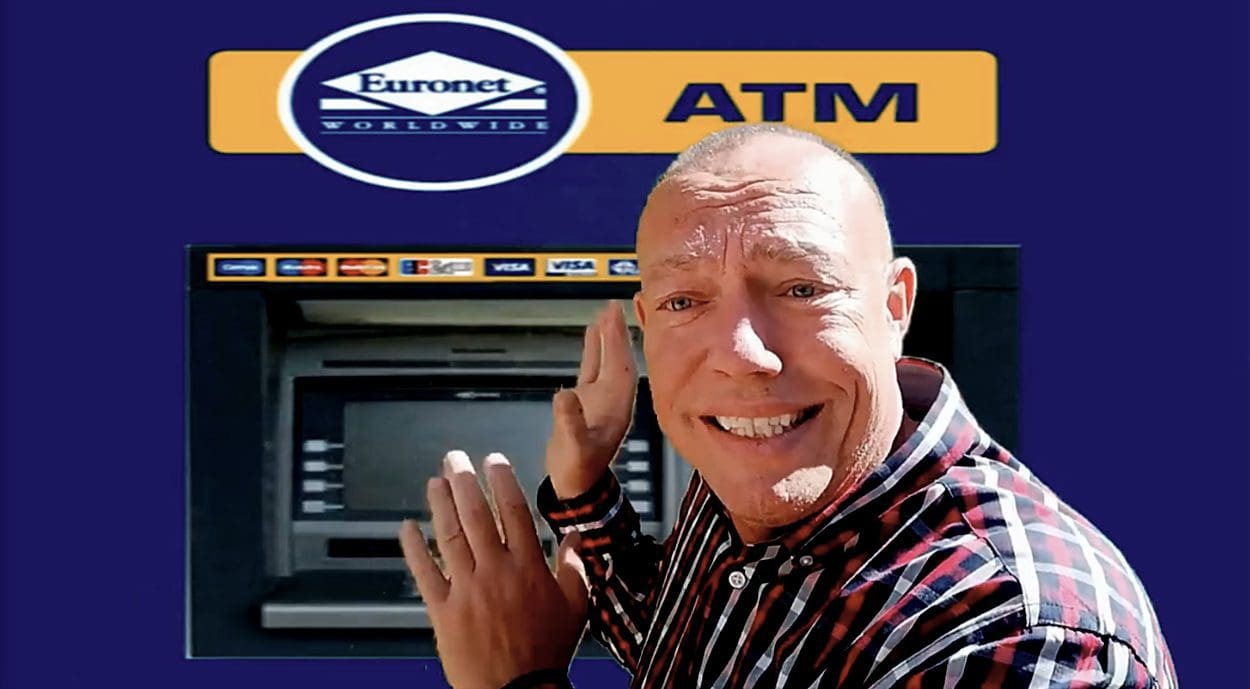 As far back as 2019, a fella called Harry posted a video to Facebook about a massive increase of ATM machines in and around Benidorm, saying that, in a six-month period, more than 100 had appeared on the streets. Since then a great many more have appeared.

Harry’s advice to holidaymakers using cards linked to non-Euro bank accounts was: Avoid them like the plague!

Why? Because, in essence, they are electronic thieves.

Harry pointed out that these machines will try to force you to withdraw “huge amounts of money, up to £1,000.” In doing so they will provide an awful rate of exchange, and you’ll get around 20 percent less than you would do if you were to use bank cash points, of which there is no shortage.

To add insult to injury these ATMs will additionally impose a withdrawal fee—normally around £5.00.

These street machines are, of course, not confined to Benidorm. They are sprouting up like mushrooms in all major European holiday destinations, and are making billions for the companies that operate them.

Another good reason to avoid these machines is that, if your card happens to be “swallowed” by one, you may have to wait for a week or longer to get it back. In fact, in some cases, you won’t get it back at all because these machines are susceptible to tampering, and your card will be taken and used by thieves.

On the other hand, if your card is, for some reason, retained by a bank’s ATM, you can go in and ask for it back, either immediately or, if it’s shut, the following day.

How to spot ATM tampering

Worryingly it’s not only freestanding ATMs that are being targeted by scammers. Last December Love Money offered advice on how to spot ATMs that may have been “customised” to record your PINs.

Nowadays, more than ever, holidaymakers—Brits in particular who, due to the UK’s cost of living crisis—are having to watch every penny. So it’s imperative that people take all necessary steps to avoid getting ripped off when at home or traveling abroad.

It’s also wise to always inform your home bank that you are going on holiday abroad. That way they will be expecting some withdrawals from your account in, say, Benidorm, which attracts millions of Brits each year.

If you don´t do this you run the risk of having your card blocked.

If you choose to turn your hard-earned pounds into euros at one of the resort’s many money exchange outlets, you could be in for a shock.

These outlets have boards outside that show current rates of exchange, but these relate to transactions involving £1,000 or more. This is not made clear, so always get a quote. Walk away if you’re offered less than current rates.

Back in 2019, in a video called “BEWARE of these 5 things in Benidorm” Asa Elliott showed how an elderly UK couple were, in essence, robbed when they changed £60.00 into euros (at the time the exchange rate was a lousy £1.11. Now its hovering around £1.17.

I remember the Good Old Days when the pound would get you about 1.50 euros. But, thanks to Brexit, at the start of 2021, the pound was approximately 15 percent weaker relative to the euro than it was on the eve of the referendum on the UK’s membership of the EU in June 2016.

Bottom line: You’re here to kick back and enjoy all the wonderful things Benidorm has to offer—day and night—but always keep in mind that you can be fleeced in ways that are both legal and illegal.

As an online travel service, Benidorm Travel Mart helps you build your own holiday by providing access to a wide range of cheap flights, hotels, and airport transfers.

Our search engine can compare hotels from all major booking companies, including Expedia, Booking.com, and Hotels.com, and help you find the best available deal.

Brits outraged as Irish get preferential treatment at Spanish airports

‘Green’ Benidorm sets a magnificent example with its recycling strategies